“A stark and honest album from a brilliant songwriter” is how americanaUK’s James McCurry described Year Of The Dog, giving it 8 out of 10.

Read on for the full review…

It’s said that those born in the year of the dog are forthright, faithful, spirited, dexterous, smart and warm-hearted.  They’re also stubborn with the right things.  It’s perhaps fitting then that Phil Smith decided that his 3rd release be titled “Year Of The Dog”.  The well-travelled Brisbane based troubadour wrote and recorded the album over a period of 3 ½ years and, given the overall tone of the album, that period threw a lot his way.  It’s clear that it’s been a long haul.

Like the best songwriters in the genre, Smith manages to shape an album of his and others’ troubles, a dash of drink, women, self-reflection and redemption. And like the best albums, “Year Of The Dog” avoids being defined by its mood; relying on the strength of the songs rather than the weight of the subject matter.

Calling Home is an affecting opener, with additional guitar and faint pedal steel offering some classic country licks and emotive atmospherics as Smith sings “rivers in the darkness we must cross, or remain forever lost. I promise to return dear, but I must go. Calling home. I’m calling home”. It is a song that recalls the best heart-breaking work of Ryan Adams.  In fact, the best tracks on the album evoke Adams, Townes Van Zandt and Kris Kristofferson.

There are nods to a number of his influences, such as Avenue Girl with echoes of Nick Drake or Neil Young, while Homeward Bound is an effective Ryan Adams and Bob Dylan fusion.  Memories is one of the best songs you’ll hear this year – sounding like Van Zandt channelled through Whiskeytown.  Like the rest of the album, the weight of the words resonate and Smith’s phrasing is perfect in sending the message home.  El Corazon, where the intricate picking is accompanied by some subtle piano, sounds like something Richard Buckner or Calexico may have produced.

The Ballad of Joseph Henry is possibly the stand-out.  A remarkable song which also happens to be the first of a tremendous 3 song cycle that brings the album to a close. It’s followed by The Train, which a is an effective Whiskeytown and Cardinals- era Ryan Adams fusion and Sometimes You Laugh; a song about the hazards of bottle that would not be out of place of Springsteen’s Nebraska or Damien Jurado’s Where Shall You Take Me?

Between his troubles and those of the people he has met on his journey, Smith has crafted a very special album.  Stark and honest, but special.

Rob Dickens is a Melbourne based roots music blogger and supporter. His site is www.robdickens101.com, and below is what he had to say about the new album Year Of The Dog.

Phil Smith hails from Brisbane Australia and is a very impressive singer and storyteller.  He is about to head out on the road for a significant tour around Australia for his new album Year Of The Dog.

The new album has seeped into my brain, slowly and steadily.  It’s a release without an emotional filter and it is stripped bare on every level.

The album for me has a deep and resonating serenity.  It is stark and profound.  The opening track “Calling Home” is a perfect blend of melody, rich voice and Dave Rawlins or Milk Carton Kids guitar picking style.  “Broken Rivers” strives for truth and freedom in another delightfully restrained piece, this time with banjo.  “Homeward Bound” is world-weary and shows a mature hand, while “Avenue Girl” is reminiscent of Nick Drake with its acoustic strumming and piano combo.  “Nightwinds” again has Smith’s voice way out front in the mix with subdued guitar and other augmented sounds pushed back for effect – backing vocals and pedal steel.

“Memories” details a drug overdose and “The Train” recounts an emotion-laden funeral day.  I am particularly fond of a number of songs/tunes called “El Corazon” and I can add Smith’s song to my list – it is beautiful and sublime from start to finish.

From all reports, 2013 was a long, hard year for Phil Smith but it has provided plenty of excellent material for Year Of The Dog, which is a brutally honest musical journal.  It’s not all doom and gloom though – there’s hope and light here as well.

Year Of The Dog is an intense and captivating release.  I look forward to his tour and seeing Phil Smith live and personal.

“Like the best songwriters in the genre, Smith manages to shape an album of his and others’ troubles, a dash of drink, women, self-reflection and redemption. And like the best albums, “Year Of The Dog” avoids being defined by its mood; relying on the strength of the songs rather than the weight of the subject matter.”

Read the full review in the ‘Press’ section of this site or copy and paste the link below into your browser.

Just when I thought it was going to be a quiet week I realised I have a bunch of radio interviews coming up before the tour kicks off. The first one will be this Wednesday 4th June on Switch 1197’s Breakfast Show. Switch is a community broadcast radio station based here in Brisbane, and it’s at 1197 on the AM dial. Tune in from 8am for a bit of a chat about the upcoming tour and maybe a song or 2. Thursday 5th June at 3:30pm I’ll be interviewed by ABC 612’s Tim Cox, with a chat and a live to air acoustic song, and the next day, Fri 6th June I’ll be on 4zzz at 11am with Quentin. The following day is the first date of the tour. The Bearded Lady in West End is where the action will be kicking off at 8pm with Bree De Rome. We’ll be on at 9, and there’s no cover charge. 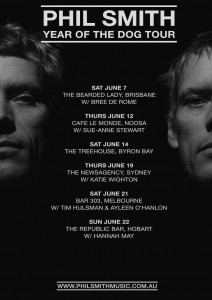 Wow! So this is the uber cool new vid for El Corazon, track 7 from the new album Year Of The Dog. It was shot and edited super quickly by two Brisbane based videographers, Jezza Keegan and Tom McCaw, with the talented Morgan Hann providing the piano playing. Enjoy!!

Phil Smith has been down and out. You can hear it in the downtrodden acoustic guitar, in the melancholic harmonica and mournful violin. Hardship permeates the haunting, hollow vocals and lugubrious cello. Here are reflections on failed ambition, death, drink and weary desperation, yet Year Of the Dog is no self-indulgent lament. “Dreams turn to dust so fast, lives just rust like an old car,” shrugs Smith on Memories. Hangdog Americana joins an acoustic palette of country, folk and blues in an intimately conversational setting. Meditative acceptance is the order of the day, exuded by rhythmic stability and quiet fingerpicking. There’s light on the horizon, though: Avenue Girl adds optimistic piano interjections, while El Corazon springs forth with classical delicacy. Smith manages to carry the hurt atop a resilient undercurrent of hope.

So! Looks like we’ll be starting work on a new video for the next single off the album this week, which is pretty exciting. We’re looking to get it out as soon as possible so I will post news on the progress as it comes in. On the gig front, we’re also putting an East Coast tour together which should take in the Sunshine Coast, Brisbane, Byron Bay, Yamba, Sydney, Melbourne and Hobart. This will be happening in June, so once those dates are confirmed I’ll post them up here also. Thanks to everyone who turned up at Crosstown last Friday for the show with Rattlehand. It was an intimate little gig, and I hope you all enjoyed the music. Phil Smith.

The Courier Mail’s Noel Mengel gave Year Of The Dog 4 stars out of a possible 5.
Read on for his review of the album

YEAR OF THE DOG
(INDEPENDENT)

“YOUR dreams turn to dust so fast/Rust like an old car that’s out in the field,’’ Brisbane songwriter Phil Smith observes on Memories, one of the key tracks on his third album, where the music is stripped lean and emotions run at high intensity. The song, with its waltz time and country fiddle, sits somewhere between Neil Young and more recent keepers of the flame like Gillian Welch and Will Oldham. Wisps of pedal steel and bluesy guitar wind through opener Calling Home, a song that feels as lonesome as the wind through the wheat. Broken Rivers, with its haunted female backing vocal and rustic banjo, finds solace in melancholy. Avenue Girl, El Corazon and The Ballad of Joseph Henry are superb folk songs, the kind that might have once appeared on a Nick Drake album, with acoustic guitar, piano and cello. And The Train, the story of attending a funeral, somehow cuts deep and lifts us up at the same time. The message here is the one we get from all the art that speaks personally to us. Sure life can be tough — the album is called Year of the Dog after all — but not so tough that songs as good as these won’t help us through.

So the lovely folks from 612ABC here in Brisbane have invited me to be part of their Something Old, Something New, Something Borrowed, Something Blue show this Friday night (28th March). Hosted by Rebecca Levingston, we’ll be playing some songs in the studio and chatting about the new album Year Of The Dog. The premise behind the show is to pick 4 songs, 2 of which will be played live in the studio. 3 songs from other artists which have been an influence, and an original song of mine which is new. The interview will be airing from 8–9pm.